President-Elect Trump’s decision to push Carrier to keep 1,000 jobs in the United States was hailed by some and condemned by others. The left and many fiscal conservatives on the right condemned the act as a $7 million payoff to Carrier, a shakedown, a poor deal, a ransom, soak the taxpayer. I understood the consternation of the fiscal conservatives as I am one of them. I found the uproar from the left a bit amusing given Obama’s $800 million American Recovery and Reinvestment Act and its failure to never once produce GDP growth in excess of 3% over his eight years – a dubious record never before accomplished in this country – with or without stimulus. The uproar on the left may have had a bit to do with who did the negotiating and who it was that benefited from the deal. Ironic, given that the Democratic Party was once upon a time the party of the American worker.

Personally, I am in favor of free markets, fiscally conservative and firmly believe in Supply Side Economics – and yet, I supported Trump’s decision. Why?

Before I fully answer that question let’s take a look at some quick comparisons: 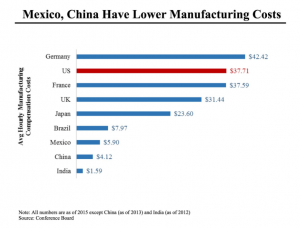 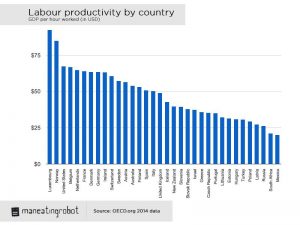 The U.S. has an average manufacturing labor rate of $37.71 compared to the Mexican labor rate of $5.90 (note that the Carrier workers make about $20 per hour). So American workers are pretty expensive at 6.4 times the cost of a Mexican worker. For Carrier the advantage is not as great as they do not carry the same legacy costs (healthcare, pension) that U.S. Automakers do. American workers cost Carrier 3.4 times as much as their Mexican counterparts.

But sometimes you get what you pay for – or at least partially so. American workers are far more productive than their Mexican counterparts – about three times as productive on average. To be fair, this three times multiple in productivity almost surely does not provide a truly honest comparison for the situation we are envisioning – as it should be noted that a Mexican worker’s productivity would also migrate upwards in a newly constructed factory – but it would still be meaningfully lower than a comparable American worker. Additionally, Carrier must contend with the capital outlays and costs that come from building an entirely new factory in a foreign country.

What’s going on here? Is Carrier truly motivated to close plants and expend precious capital on new expensive plants in Mexico just to exploit a small (but real) labor cost advantage after adjusting for productivity. Automotive companies appear to still have a significant labor cost advantage by relocating to Mexico but Carrier’s labor cost savings appear to be a lessened factor. Perhaps it’s because Carrier’s domestic plants are antiquated and need to be updated anyway. Okay, maybe. But if that’s the case why not just build them in the U.S. or modernize the ones they already have?

No. There are other, more complicated factors at play.

This chart from the Harvard Business Review is a bit busy, slightly confusing and probably hard to read, but it captures some of the issues companies look at when making location decisions. In particular, note the “Worse & Deteriorating” section. The items noted here all relate to costs imposed by the government. Specifically: Regulations, Complexity of Tax Code, Macroeconomic Policy, Effectiveness of Political System (this captures a lot of things – think environmental costs and the likelihood of future costs), Efficiency of Legal Framework (lawsuits) and Education System (skills of future workers). These factors are hard to quantify from the outside but they are very real costs to businesses operating here. And they directly factor into a business’s decisions to keep manufacturing here.

To be very clear – I am not trying to say labor costs are not a factor. They can be a very large factor in any company’s decision-making process – oftentimes the largest factor. But labor costs are also just one cost among many. And these costs vary from business to business.

What I am trying to say is that our government has created an unfriendly environment for many businesses – particularly manufacturing businesses – to keep production in the United States.

Back to Trump’s Carrier deal:

Many were decrying the $7 million in tax incentives (over 10 years) that were provided to keep Carrier here. The $7 million is actually quite small and was not the reason Carrier elected to stay – Carrier is actually going to have to take a charge against earnings on a net basis to invest in the modernization of its plant (the workers’ salaries whose jobs were saved add up to $40 million per year by contrast). Think of it in these terms – Carrier gets $750,000 in tax breaks per year. The salaries from the workers bring in at least $40 million (more w/any benefits). Taxes alone cover the Carrier deal in year one. And the cost is further offset by the domino effect from money then put into the local economy by these workers – along with the Carrier investment into the plant modernization. The Carrier Deal is self-funding in year one.

By way of comparison to the $7 million in self-funded tax incentives (and to introduce some rationality), the Obama Administration has given $4.9 billion to Elon Musk and his three primary companies – Tesla Motors, SpaceX and SolarCity. Let me say that again: $4,900,000,000 to Elon Musk…

Carrier agreed to stay for two reasons: First, there would likely be significant brand impairment if they re-located after such a public scuffle, and secondly, because they are betting on the Trump Administration to reform our unwise, unfair and uncompetitive tax and regulatory structure that the Obama Administration has imposed on this country.

Carrier is owned by United Technologies which is a huge company – revenues of $57 billion and almost 200,000 employees. And yet its CEO, Greg Hayes, came to meet with Trump and Vice-President Pence’s transition team over a single Carrier facility. According to the Wall Street Journal “people familiar with the negotiations said the company and Mr. Pence’s team also discussed a wide range of priorities, including United Technologies’ interest in a corporate tax overhaul, and regulations the company feels have been a burden to its business.”

This is the reason United Technologies CEO Greg Hayes came.

A tax overhaul and regulatory reform are the two greatest boons to our economy that Trump can accomplish. And he means to.

I am broadly against any government interference in company decisions – or government arguing on a company’s employees behalf. But this intervention – and the slight (self-funded) cost associated with it – are utterly dwarfed by the far broader issue of the costs imposed on businesses by our government. Costs that must be addressed and fixed.

And that’s partly what Trump’s announcement was about. The Carrier deal sent out three large messages that have been clearly heard by their intended audiences.

The first message is to the workers – and the base that supported him. President-Elect Trump is telling workers – all workers – they matter to him. They are not forgotten as they have been all these years. Their voices have been heard, recognized and their voices count. That is a powerful and important message that has not been delivered by a president in a long while. The message resonated. And the message mattered.

The second message is to companies. Trump was putting them on notice to reconsider future plans to move manufacturing facilities abroad.

And it’s this part of the message I have issue with. Economies should always use a carrot (free markets) – not a stick. Allow for the conditions that incentivize companies to operate here. Do not do so by force. That being said, this deal has come cheaply for Trump. The Carrier deal will likely have a huge ripple effect through other companies and their decision-making process.

My Prediction: many companies will now loudly and publicly announce decisions to keep facilities here. It will become a Public Relations move for them. And it will benefit their sales to do so. “Made in the USA” is back.

The third message is to leaders and political figures of all types – CEOs, Congressman – for that matter, you and me. And that message is “Get Ready for Change”. Obama said the word “Change”. Trump is enacting “Change”.

We are going to be witnessing one of the greatest stages of deregulation and tax overhaul we have ever experienced as a country. And the effects will be enormous. And they will be a huge benefit to our economy. Get ready for GDP growth because it is coming.

And that is why I supported the Carrier Deal.