As I’ve been traveling for a few days, today will serve as an overview of sorts.

Before we move forward, theconservativetreehouse provides us with a good overview of FISA-702 (16)(17):

FISA searches can be conducted on any foreign person without issue.  All non-U.S. citizens on the entire planet can be searched 24/7/365 no issues.  FISA searches on foreign people have no restrictions at all.

However, when the FISA search returns data identifying a U.S. citizen, everything changes. Those changes are under the identifying term “702”.  A “702” is an American person.

All U.S. citizens are protected by the fourth amendment against unlawful search and seizure. All searches of U.S. people must have a valid reason.  Title III says any search for a potential criminal investigation must have a judicial warrant.  Additionally, any criminal search of the FISA database must also have a warrant (technically, ‘approval’).

Any FISA searches of foreign subjects, might need FISA Court approval if the returned data includes a U.S. subject (“702”).

At this point, it’s become increasingly clear the activity both the NSD and the FBI were engaged in. Details and names are forthcoming.

We know that Query Compliance Problems were identified by the Inspector General’s office of the NSA in 2015.

The NSA Inspector General released a critical Report on the Special Study of NSA Controls to Comply with the FISA Amendments Act §§704 and 705(b) Targeting and Minimization Procedures on January 7, 2016. The report was made public on May 10, 2017: 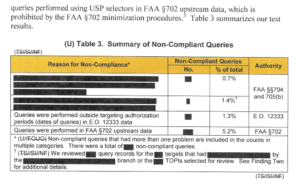 We identified another [redacted] queries that were performed outside the targeting authorization periods in E.O. 12333 data, which is prohibited by the E.O. 12333 minimization procedures. We also identified queries performed using USP selectors in FAA §702 upstream data, which is prohibited by the FAA §702 minimization procedures.

Table 3 shows four types of violations. The most frequent violation – 5.2% of the total – came from Section 702 upstream “About” queries.

As I noted in An American Hero & the Death of a FISA Narrative:

It’s unclear if [NSA Head] Rogers discovered the 702 violations and reported them in 2015, or if it was the Inspector General who found them. Either way, Rogers became aware of Section 702 violations sometime in 2015. Following the IG’s report, Rogers implemented a tightening of internal rules at the NSA.

The IG’s report and Roger’s tightening of internal rules did not halt the Query Compliance Problems.

We already know the following timeline:

During the investigation, the NSA compliance officer identified strange 702 “About Queries” that were being conducted. These Queries represented fourth amendment violations – unlawful surveillance.

October 20, 2016 – Rogers was briefed by the compliance officer on what had been discovered.

Rogers immediately ordered the “About Query” activity to stop, reported the activity to the DOJ, and then went to the FISA court.

The October 26, 2016 Notice informed the Court that NSA Analysts had been conducting such queries in violation of that prohibition, with much greater frequency than had previously been disclosed to the Court.

The Court ascribed the government’s failure to disclose the IG and OCO reviews at the October 4, 2016 hearing [Obama’s NSD Director John Carlin – NOT Rogers] to an institutional “Lack of Candor” and emphasized that “this is a very serious Fourth Amendment Issue”.

The following screen captures begin on numbered page 82 of the document and continue through page 87. 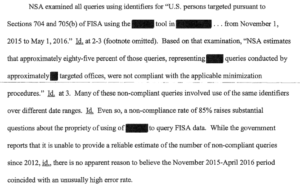 A non-compliance rate of 85% raises substantial questions about the propriety of using of [Redacted – likely “About”] query FISA data.

The FBI had disclosed raw FISA information, including but not limited to Section 702-acquired information, to a [Redacted]

[Redacted] could be “independent contractor”. It could also be something more direct. Feel free to fill in the blank. 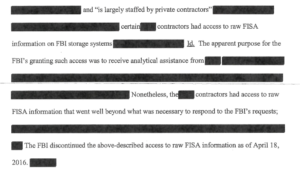 Is largely staffed by private contractors.

The {Redacted} contractors had access to raw FISA information that went well beyond what was necessary to respond to the FBI’s requests.

The FBI discontinued the above-described access to raw FISA information as of April 18, 2016.

Now we know when Rogers began his full audit on Section 702 procedures. 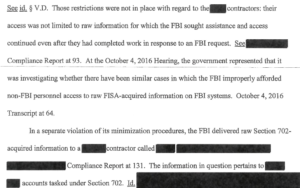 Their [contractors] access was not limited to raw information for which the FBI sought assistance – and access continued even after they had completed work in response to an FBI request.

Personnel who worked with the information were “not directly supervised” by or otherwise under the direction and control.

The FBI had given the information to the private entity [Redacted] not to an assisting federal agency.

The Court is nonetheless concerned about the FBI’s apparent disregard of minimization rules and whether the FBI may be engaging in similar disclosures of raw Section 702 information that have not been reported.

The improper access granted to the [Redacted] contractors was apparently in place [Redacted] and seems to have been the result of deliberate decision-making.

The FBI and the NSD were directly accessing the NSA database using “To” and “From” FISA-702(16) & “About” FISA-702(17) queries. They did not do this solely by themselves. They also employed private contractors to engage in the process.

We know the activity was ongoing from November 2015 to April 18, 2016. We also have no reason to believe it was not ongoing earlier.

To make matters even more disturbing, The Conservative Treehouse (TCTH) has been reporting that one of the private contractors was Fusion GPS. At this point, we have no proof of this. It is merely a tip provided to TCTH.

However, I will note TCTH rarely engages in speculation and has a stellar track record. I do not recall them being willing to quote a tip prior to this. Their confidence level can be characterized as high. Make of it what you will.

On or before April 18, 2016 – NSA Director Mike Rogers orders the NSA compliance officer to run a full audit on 702 NSA compliance.

With the benefit of understanding the FBI’s activity during the November 2015-April 2016 period, re-examine the short timeline above.

We know from the FISA Court documents that information being gathered through illegal “About” queries had little or nothing to do with National Security. They were unauthorized, specifically related to U.S. persons and were the result of deliberate decision-making.

Assuming TCTH’s source is correct, Fusion GPS was one of these contractors.

Once the process had been stopped – and was now potentially exposed – the FBI & NSD decided what to do with the previously gathered information.

The idea of a Dossier was formulated. It provided two purposes.

Prior to the dates provided by the FISA Court ruling, it appeared that intelligence gathering efforts by the FBI & NSD ended on October 26 2016, when Rogers informed the FISA Court. Dissemination of that information was thought to have begun in November 2016.

We now know this to be not entirely true.

The information gathering period by independent contractors [Fusion – perhaps others] ended on April 18, 2016.

The information packaging and dissemination by these same independent contractors began on April 19, 2016.

Which leads to this conclusion.

The Trump Dossier was not created to allow for spying on the Trump Campaign. The Dossier was created to gain a FISA Court approval for illegal surveillance activity that had already taken place (FISA 702 approval can be granted retroactively).

And once approval has been given, the previously obtained 702 data has been legitimized.

It can be further mined and used to obtain additional information. It now becomes legal to maintain surveillance on the Trump Campaign using data that originated with the “incidental” capture of U.S. persons in the collection of data on non-U.S. persons.

We already know that Agency (non-independent contractor) surveillance continued at the NSD (& probably the FBI) – until at least October 26, 2016.

On November 17th, 2016, the Trump Transition Team announces they are moving all transition activity to Trump National Golf Club in Bedminster, New Jersey.

On November 19th The Washington Post reported on a recommendation made by Defense Secretary Ash Carter and Director of National Intelligence James Clapper in October that Mike Rogers be removed from his NSA position.

For more on Rogers, see An American Hero & the Death of a FISA Narrative.

As I noted in a July 30, 2017 piece, Fusion GPS had previous ties to Veselnitskaya:

In 2013, Veselnitskaya hired the law firm BakerHostetler to represent Prevezon, a Russian holding company based in Cyprus accused by the US government of laundering stolen cash into New York City real estate. Browder told prosecutors that the laundered money was stolen from Russia as part of the tax-fraud scheme that Magnitsky uncovered.

To rebut that claim, BakerHostetler hired Fusion to dig up dirt on Browder.

Donald Trump Jr. went into the meeting expecting opposition information, only to find Akhmetshin and Veselnitskaya had actually come to lobby for repeal of the Magnitsky Act. The discussion ended quickly as Trump Jr and Kushner realized the meeting had been set up under false pretenses.

Fusion GPS set up this meeting. And, of course, Fusion GPS is also the firm behind the infamous Trump Dossier.

Glenn Simpson was the author of the memo used by Veselnitskaya to pitch her meeting with Trump Jr.

Remember, FISA searches can be conducted on any foreign person with no restrictions at all…

President Trump recently tweeted about FISA – and a “Fix”.

With that being said, I have personally directed the fix to the unmasking process since taking office and today’s vote is about foreign surveillance of foreign bad guys on foreign land. We need it! Get smart!

I think it relates not only to Section 702 “About” searches, but also to additional loopholes that have been discovered.

I believe “The Fix” may be related to Nunes’ letter to Dan Coates. “we have identified a significant issue that will require changes to federal law”
https://t.co/Mk5DSMt4D5

I closed a recent piece with the following statement:

We’d already seen some of this activity.

First from an article in the New York Times. And then from an editorial by Glenn Simpson of Fusion GPS. Both efforts were laughable and easily debunked (see links).

On January 13, 2017, theconservativetreehouse posted an article with an interesting video of Sara Carter on Jesse Watters’ show. Carter has had more than her share of “fortuitous” stories from “intelligence sources”. The video is prompted:

CARTER: [The Dossier was] a disinformation campaign by the Russians. So the Russians actually used this dossier to put in false information.

WATTERS: We either got duped by the Russians or Hillary paid for the duping herself…

We’d been hearing from the media how the Dossier is nothing – minimizing its significance in the FBI’s Russia-Trump investigation.

Suddenly the Clinton Campaign, Glenn Simpson and Fusion are national heroes for having alerted the nation to possible dangers and foreign influences – even if they were mistaken.

Of course this new narrative fails to explain why Simpson and Fusion did everything under their power to avoid talking to Congress or disclosing any information at all (see here).

Or why the Clinton Campaign and the DNC tried to hide their funding of Fusion GPS and the Dossier.

There’s also a bigger problem. As I noted earlier:

The Trump Dossier was not created to allow for spying on the Trump Campaign. The Dossier was created to gain a FISA Court approval for illegal surveillance activity that had already taken place.

Good luck with that.

DoJ turns over some of the 1.2 million documents requested by Hse Judiciary Cmte as part of Congressional probe into DoJ & the election

It’s going to be another interesting week.

older post  An American Hero & the Death of a FISA Narrative