🚨 #BREAKING: @RepJerryNadler sends a letter to AG #Sessions & @FBI Director #Wray regarding the letter sent by @RepGoodlatte which requests certain materials about “potential abuses of #FISA” allegedly directed “against those in the @realDonaldTrump Administration.”

It appears that House Judiciary Chairman Bob Goodlatte has sent a letter to the presiding judge of the FISA Court requesting materials “about potential abuses of the Foreign Intelligence Surveillance Act”.

The Chairman also did not consult with us before sending a similar letter to the presiding judge of the Foreign Intelligence Surveillance Court on January 16 [2018]. 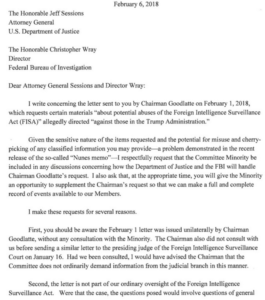 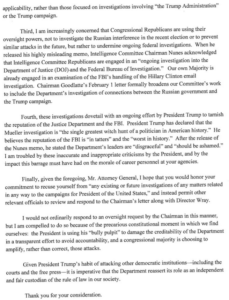 Goodlatte’s letter has not been made public.

CNN, which obtained a copy of Goodlatte’s letter, reported on this yesterday:

As the Presiding Judge of the FISC, you must be similarly concerned that the Executive Branch allegedly used an unverified dossier as evidence showing probable cause that someone connected with the Trump campaign, Carter Page, was an agent of a foreign power

The presiding judge of the FISA Court is Rosemary M. Collyer.

She is the judge who wrote the 99 page April 26, 2017 Memorandum Opinion and Order regarding the findings by NSA Mike Rogers.

From the FISA Court ruling:

The October 26, 2016 Notice informed the Court that NSA Analysts had been conducting such queries in violation of that prohibition, with much greater frequency than had previously been disclosed to the Court.

The Court ascribed the government’s failure to disclose the IG and OCO reviews at the October 4, 2016 hearing [Obama’s NSD Director John Carlin – NOT Rogers] to an institutional “Lack of Candor” and emphasized that “this is a very serious Fourth Amendment Issue”.

A non-compliance rate of 85% raises substantial questions about the propriety of using of [Redacted – likely “About”] query FISA data.

The FBI had disclosed raw FISA information, including but not limited to Section 702-acquired information, to a [Redacted].

Is largely staffed by private contractors.

The {Redacted} contractors had access to raw FISA information that went well beyond what was necessary to respond to the FBI’s requests.

The FBI discontinued the above-described access to raw FISA information as of April 18, 2016.

Their [contractors] access was not limited to raw information for which the FBI sought assistance – and access continued even after they had completed work in response to an FBI request.

The FBI had given the information to the private entity [Redacted] not to an assisting federal agency.

The Court is nonetheless concerned about the FBI’s apparent disregard of minimization rules and whether the FBI may be engaging in similar disclosures of raw Section 702 information that have not been reported.

The improper access granted to the [Redacted] contractors was apparently in place [Redacted] and seems to have been the result of deliberate decision-making.

This all points to substantial instances of improper surveillance. Going back to at least November 2015 – probably longer.

We do not have Goodlatte’s letter. But Judge Collyer has already issued a damning Opinion of FISA Court abuse under the Obama Administration.

Judge Collyer’s response – if she chooses to respond – could prove extremely enlightening.