There’s no allegation that any American was knowingly involved in the conspiracy. – Deputy Attorney General Rod Rosenstein

Nor was there an allegation that the efforts of the defendants affected the outcome of the election. – Deputy Attorney General Rod Rosenstein

You can find the full Mueller Indictment here.

Conclusion: There’s trolls on the Internet

There’s trolls on the internet.

DOJ also confirms there is no Nigerian vault of money as claimed in that email you received in 2008.

For those of us keeping score, this is what really happened:

All the while we provide excellent cover for Horowitz who conducted a complete investigation of the FBI & DOJ with no media scrutiny. Best bait and switch in political history.

Inspector General Horowitz – with 500 employees and a $100 million budget. 1.2 million documents – and counting.

For more on Inspector General Michael Horowitz and his year-long Investigation see:

Back to the Mueller Indictment.

The intent behind the activities was “to sow discord in the U.S. political system”: 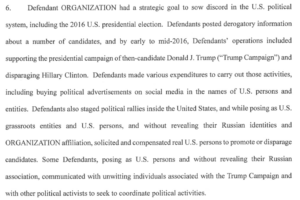 But it’s this last part of the same paragraph that’s important:

There’s no collusion if members of the Trump Campaign didn’t know they communicated with Russian sources.

This paragraph from page 23 pretty much sums up activities contained in the indictment: 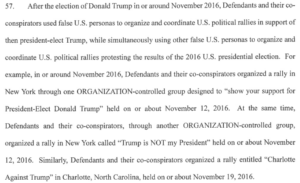 The Russians played both sides.

There was also this intriguing tidbit on page 14:

At the end of the day this is what actually transpired:

Russia started their anti-US campaign in 2014, long before I announced that I would run for President. The results of the election were not impacted. The Trump campaign did nothing wrong – no collusion!

By rights the Mueller Investigation should be finished.

It’s time to focus on the real investigation.

newer post  Something Rotten in Denmark – The Michael Flynn Case

older post  Where is Adam Schiff & the Democrat Memo