You can find the pdf here.

So, why did it take Adam Schiff and the Democrats so long to release their Memo if it was so important. And why release the Memo on a Saturday afternoon.

In, Where is Adam Schiff and the Democrat Memo, I noted the following:

The problem was the Grassley Memo.

It was so packed with damning information regarding the credibility of Steele – and the FBI – that it utterly superseded the Democrat’s Memo.

As a result, Schiff no longer wants his Memo to be released.

So it’s no surprise that Schiff quietly put out his Memo late on a Saturday afternoon.

Unfortunately for Schiff, Devin Nunes had a detailed response at the ready.

The American people now clearly understand that the FBI used political dirt paid for by the Democratic Party to spy on an American citizen from the Republican Party. Furthermore, the FISA court was misled about Mr. Page’s past interactions with the FBI in which he helped build a case against Russian operatives in America who were brought to justice. It defies belief that the Department of Justice and FBI failed to provide information to a secret court that they had provided to an open federal court regarding their past interactions with Mr. Page.

More importantly, Nunes had a set of point by point rebuttals which he immediately published in two parts.

The first, titled, The Democrats’ Memo: Key Points, is a one-page summation of the Democrat Memo’s key points along with rebuttals to each key point. 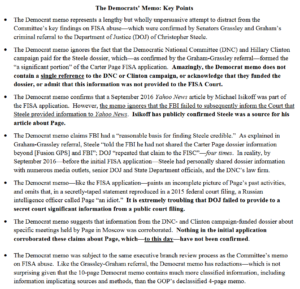 The second, The Democrats’ Memo: Charge and Response, is a five-page, point-by-point dismantling of the Democrat Memo.

Some major response points by Nunes:

DOJ and FBI’s reliance on the DNC- and Clinton-campaign funded dossier in court filings, not the overall investigation, is the focus of the GOP memo.

The Steele dossier was the FBI’s only source for the allegations in the initial application that Page met with particular Russians in July 2016.

Four times DOJ repeated to the FISA Court (FISC) an incorrect assessment that Steele had not been a source for an earlier, September 2016 Yahoo News article by Michael Isikoff.

Contrary to the Democrat memo’s claims, no restrictions were placed on the authorized dissemination of information in the GOP memo, which the Committee determined should be disclosed – consistent with House and Committee rules – to all Members of the House, and the American people.

Russia’s aggressive meddling in the 2016 U.S. election, which the GOP memo does not dispute, is a key focus of the Committee’s ongoing Russia investigation.

The Democrat memo fails to explain why, if evidence of Page’s past activities was so compelling, the Steele dossier was used in the FISA application at all, much less formed the “bulk” of the Page FISA application.

The Democrat memo also fails to explain why, if DOJ and FBI had “probable cause” that Page was a Russian agent, they waited until shortly after receiving the Steele dossier to seek a warrant.

Additionally, the Democrat memo – like the FISA application itself – paints an incomplete and misleading picture of Page’s past activities and interactions with the FBI.

By participating in voluntary interviews with FBI, Page cooperated with the successful prosecution of the Russian intelligence officer who called him “an idiot” – and two of his colleagues.

As confirmed by Senators Grassley and Graham’s criminal referral of Steele, the dossier formed “a significant portion” of the Carter Page FISA application.

All of the Steele dossier’s specific claims about Page – including that he met with Igor Sechin and Igor Diveykin in Moscow in July 2016 – were uncorroborated by any independent source, and they remain unconfirmed.

None of the Page FISA applications “disclose or reference the role of the DNC, Clinton campaign, or any party/campaign in funding Steele’s efforts.” Instead, the FISA application relies on a convoluted statement buried in a footnote.

Moreover, the footnote obscures, rather than clarifies Steele’s political motivation – and what DOJ and FBI officials actually knew about the dossier’s political origins.

FBI’s reliance on Steele’s credibility was badly misplaced. Steele violated FBI’s trust by making unauthorized disclosures to the media in October 2016, resulting in his termination as an FBI source.

The agency had virtually no visibility into the credibility of Steele’s sub-sources and sub-sub-sources who originated the dossier’s allegations.

Steele has admitted to meeting with Yahoo News in September 2016, and Isikoff has publicly confirmed that Steele was a source for the article.

FBI authorized payment to Steele for the dossier information – before he was terminated as an FBI source for making unauthorized disclosures to the media. This financial motivation was not disclosed to the Court.

Neither Steele’s bias, nor Ohr’s relationship with Steele or the FBI, nor the fact that Ohr’s wife worked for Fusion GPS on its DNC- and Clinton campaign-funded Trump research, was disclosed to the Court in any of the FISA applications.

The apparent bias of the investigators displayed in Strzok-Page text messages is highly relevant to an analysis of the investigation, including the controversial decision to seek a FISA warrant on Carter Page.

As I said, it’s a point-by-point dismantling of Schiff’s Memo.

The most succinct summation of Schiff’s Memo I’ve seen so far:

Here is the executive summary pic.twitter.com/wliNpuEtI5

For an examination of the Grassley Memo see:

For an examination of the Nunes Memo see:

The House Memo – An Examination & Some Implications

A Detailed Rebuttal to Media Criticisms of the Nunes Memo