President Trump has tweeted out a series of focused messages (located at bottom of post) over the last ten days ending with this:

But he has never, to my knowledge, mentioned the Inspector General.

Which Horowitz most definitely is not.

Yes, Horowitz was appointed by Obama.

Trump’s tweets are not always what they seem. There is often something deeper contained within.

Sometimes a distraction – or a misdirection.

That moment when you suddenly suspect the IG’s Report is closer to being released than previously thought.

I have discussed the Inspector General and his investigation numerous times:

Virtually all of the evidence that has surfaced has come – in one form or another – from the Inspector General and his investigative team.

Consider a short timeline I laid out in another post regarding the strange case of General Michael Flynn:

On December 1, 2017, Judge Contreras presided over a hearing where Flynn pleaded guilty to lying to the Federal Bureau of Investigation about his contacts with Russia.

Here is what occurred between the two dates in the Flynn Case:

The floodgates of information opened.

But where, exactly, did this information originate.

In it I noted the following:

This small paragraph, located at the very bottom of a New York Times article on Strzok, gave insight into a much larger picture:

The inquiry into Mr. Strzok is being conducted by the Justice Department’s inspector general, Michael E. Horowitz, who is leading a broad examination of how the F.B.I. handled the Clinton email investigation. It is not clear whether Mr. Horowitz will make the text messages public as part of his report in the inquiry. Mr. Horowitz, who announced the beginning of his investigation in January, declined to characterize his findings but said that he hoped to have a copy of his report released by March or April [2018].

On December 2, 2017, the Office of the Inspector General quietly released the following statement:

The January 2017 statement issued by the Department of Justice Office of the Inspector General (OIG) announcing its review of allegations regarding various actions of the Department of Justice and the Federal Bureau of Investigation in advance of the 2016 election stated that the OIG review would, among other things, consider whether certain underlying investigative decisions were based on improper considerations and that we also would include issues that might arise during the course of the review.

The OIG has been reviewing allegations involving communications between certain individuals, and will report its findings regarding those allegations promptly upon completion of the review of them.

IG Horowitz was announcing himself as the source of the Strzok/Page texts.

Horowitz had been quietly working for almost a full year.

To the extent it was even noticed, most quickly forgot the announcement had been made.

There was nothing – literally no news whatsoever – until December 2, 2017.

The day after General Michael Flynn pleaded guilty to lying to the FBI.

Then all hell broke loose.

General Flynn was found guilty of lying to the FBI – about conduct that was completely legal.

This fact was made odder still by an admission James Comey made to Congress:

Comey told lawmakers that the FBI agents who interviewed Flynn did not believe that Flynn had lied to them, or that any inaccuracies in his answers were intentional.

Comey went to Capitol Hill in March to brief lawmakers privately. That is when he told them that the FBI agents who interviewed Flynn did not believe Flynn had lied, or that any inaccuracies in Flynn’s answers were intentional. And that is when some lawmakers got the impression that Flynn would not be charged with any crime pertaining to the Jan. 24 interview.

There are a lot of things that aren’t right with the Flynn Case – more than can be explained here. I encourage you to give the Flynn piece a read.

The DOJ’s Office of Inspector General announced the Initiation of Review on January 12, 2107. Then nothing – Crickets. Until the day after General Flynn plead guilty.

Then – a one paragraph statement from the OIG and a flood of information concurrently came pouring forth – introducing us to new players:

And reminding of us of known ones:

Ties between these people and Fusion GPS, Glenn Simpson and Christopher Steel continued to unfold.

We discovered how the DOJ’s NSD and FBI used independent contractors to gather information using illegal FISA “About” queries.

It became clear how the Dossier was used to establish surveillance over the Trump Campaign.

Investigative letters have poured forth.

Leading to the Nunes House Memo and the Grassley Memo.

And the resignations began.

Although a surprising few remain in place:

From Resignations, Demotions & Some Details – Complicity at the FBI & DOJ:

In both articles I make the case that Priestap is cooperating with the many investigations.

Baker, Strzok, Page and Ohr are likely cooperating as well. They were caught dead to rights – firmly ensnared in the Inspector General’s Investigation.

It prompted a highly unusual response:

AG SESSIONS STATEMENT: “We have initiated the appropriate process that will ensure complaints against this Department will be fully and fairly acted upon if necessary….” (1/2) https://t.co/MXsl6QF0r3

AG SESSIONS STATEMENT CT’D: “As long as I am the Attorney General, I will continue to discharge my duties with integrity and honor, and this Department will continue to do its work in a fair and impartial manner according to the law and Constitution. “ (2/2) https://t.co/MXsl6QF0r3

Sessions never responds. But he did so today.

Concurrent with this, Representative Lee Zeldin sent a letter signed by himself and twelve other members of Congress asking Session to appoint a Special Counsel:

Below is a photo-grab of the letter: 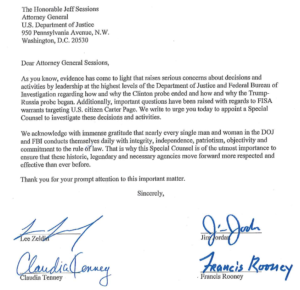 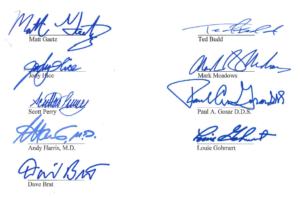 Inspector General Horowitz has previously said that he hoped to have a copy of his report released by March or April 2018.

It’s my suspicion that things are beginning to re-accelerate. I think we may be approaching the release of Inspector General’s report.

The Inspector General has no prosecutorial authority – as President Trump notes.

But the Inspector General can make referrals for prosecution.

Which is exactly what he is going to do – with all the evidence already provided.

DoJ turns over some of the 1.2 million documents requested by Hse Judiciary Cmte as part of Congressional probe into DoJ & the election

Yes, I know Congress has no prosecutorial authority either.

But they too can make referrals. Grassley already has:

And Horowitz won’t be the only one making referrals for prosecutions from these 3 scandals. Members of Congress like Nunes, Grassley and Goodlatte will also likely hand in their own referrals. Grassley has already made 1 such referral: Christopher Steele.

My point is simple.

The information and evidence is already being disbursed to the appropriate people.

The team is most likely already in place:

No. Inspector General Michael Horowitz has a team of DOJ prosecutors working with him. This has been obvious since December ’07 when we saw the information about the Strzok, Page, Ohr, investigative outcomes. When IG finds criminality, DOJ assigns prosecutor/lawyer to parallel https://t.co/OVTbudbe7g

I think we are moving closer to a wild ride.

For those interested, I maintain a Compilation & Timeline that should prove helpful to those wanting to look into the unfolding FBI/DOJ/Obama Administration scandal.

Links and descriptions of past posts are provided.

If it was the GOAL of Russia to create discord, disruption and chaos within the U.S. then, with all of the Committee Hearings, Investigations and Party hatred, they have succeeded beyond their wildest dreams. They are laughing their asses off in Moscow. Get smart America!

Obama was President up to, and beyond, the 2016 Election. So why didn’t he do something about Russian meddling?

“There is no serious person out there who would suggest somehow that you could even rig America’s elections, there’s no evidence that that has happened in the past or that it will happen this time, and so I’d invite Mr. Trump to stop whining and make his case to get votes.” …..

….The President Obama quote just before election. That’s because he thought Crooked Hillary was going to win and he didn’t want to “rock the boat.” When I easily won the Electoral College, the whole game changed and the Russian excuse became the narrative of the Dems.

I have been much tougher on Russia than Obama, just look at the facts. Total Fake News!

Question: If all of the Russian meddling took place during the Obama Administration, right up to January 20th, why aren’t they the subject of the investigation? Why didn’t Obama do something about the meddling? Why aren’t Dem crimes under investigation? Ask Jeff Sessions!

The Democrat memo response on government surveillance abuses is a total political and legal BUST. Just confirms all of the terrible things that were done. SO ILLEGAL!

Dem Memo: FBI did not disclose who the clients were – the Clinton Campaign and the DNC. Wow!

“Russians had no compromising information on Donald Trump” @FoxNews Of course not, because there is none, and never was. This whole Witch Hunt is an illegal disgrace…and Obama did nothing about Russia!

“Congressman Schiff omitted and distorted key facts” @FoxNews So, what else is new. He is a total phony!

President @realDonaldTrump on Dem FISA memo: “A lot of bad things happened on the other side, not on this side, but the other side. And somebody should look into it because what they did was really fraudulent.” pic.twitter.com/PgEyKLAYEM

“He’s got a very good point. Somebody in the Justice Department has a treasure trove of evidence of Mrs. Clinton’s criminality at her own hands, or through others, that ought to be investigated. I fully agree with the President on that.” @judgenapolitano on @marthamaccallum Show

“I’ve been skeptical about the collusion and obstruction claims for the last year. I just don’t see the evidence….in terms of the collusion, it’s all a bit implausible based on the evidence we have.” Jonathan Turley on @FoxNews

“We’ve seen NO EVIDENCE OF COLLUSION….I have seen nothing, the firing of James Comey and all of the aftermath, that suggests that the President has obstructed justice because he’s exercising his power as the President of the U.S. I just don’t see it.” Judge Ken Starr

newer post  About that Schiff Memo – An Extensive Rebuttal