Don’t make the mistake of thinking you’re Facebook’s customer, you’re not—you’re the product. Its customers are the advertisers. – Bruce Schneier

Facebook is coming under heavy fire. And Congressional inquiry:

Facebook on Sunday faced a backlash about how it protects user data, as American and British lawmakers demanded that it explain how a political data firm with links to President Trump’s 2016 campaign was able to harvest private information from more than 50 million Facebook profiles without the social network’s alerting users.

As reported by CBS News:

The Trump campaign never used the psychographic data at the heart of a whistleblower who once worked to help acquire the data’s reporting – principally because it was relatively new and of suspect quality and value.

In late September 2016, Cambridge and other data vendors were submitting bids to the Trump campaign. Then-candidate Trump’s campaign used Cambridge Analytica during the primaries and in the summer because it was never certain the Republican National Committee would be a willing, cooperative partner.

Cambridge Analytica was phased out during the general election.

The Trump campaign had tested the RNC data, and it proved to be vastly more accurate than Cambridge Analytica’s, and when it was clear the RNC would be a willing partner, Mr. Trump’s campaign was able to rely solely on the RNC.

Obama’s re-election team are building a vast digital data operation that for the first time combines a unified database on millions of Americans with the power of Facebook to target individual voters to a degree never achieved before.

At the core is a single beating heart – a unified computer database that gathers and refines information on millions of committed and potential Obama voters. The database will allow staff and volunteers at all levels of the campaign to unlock knowledge about individual voters.

Consciously or otherwise, the individual volunteer will be injecting all the information they store publicly on their Facebook page – home location, date of birth, interests and, crucially, network of friends – directly into the central Obama database.

At the time, this news was greeted with glowing acclaim over the sophistication of Obama’s digital campaign.

Obama’s Election Team apparently had full access to Facebook’s data. Access that would not have been granted to Conservatives.

This is not hyperbole.

In 2011, Carol Davidsen, director of data integration and media analytics for Obama for America, built a database of every American voter using the same Facebook developer tool used by Cambridge, known as the social graph API.

Any time people used Facebook’s log-in button to sign on to the campaign’s website, the Obama data scientists were able to access their profile as well as their friends’ information. That allowed them to chart the closeness of people’s relationships and make estimates about which people would be most likely to influence other people in their network to vote.

“We ingested the entire U.S. social graph,” Davidsen said in an interview. “We would ask permission to basically scrape your profile, and also scrape your friends, basically anything that was available to scrape. We scraped it all.”

Davidsen expanded on the situation in a series of tweets:

They came to office in the days following election recruiting & were very candid that they allowed us to do things they wouldn’t have allowed someone else to do because they were on our side.

“They didn’t stop us once they realized that was what we were doing.”

“They allowed us to do things they wouldn’t have allowed someone else to do because they were on our side.”

These claims of biased assistance by Facebook would seem to be bolstered in two emails released by Wikileaks. 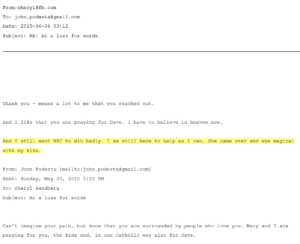 Sandberg: I still want HRC to win badly. I am still here to help as I can. 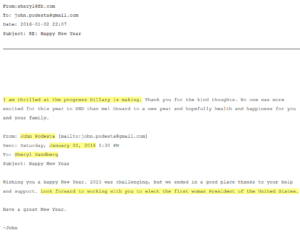 Sandberg: I am thrilled at the progress Hillary is making.

Podesta: Look forward to working with you to elect the first woman President of the United States.

There are many claims of liberal biases lurking in the algorithms created by Facebook, Google and Twitter. Liberal political affiliations of tech companies are well known.

Peter Thiel, a rare tech conservative, has referred to Silicon Valley as “a one-party state”.

Google’s Eric Schmidt, whose relationship with Obama goes back to 2007, provided assistance to Obama in both elections:

In the 2012 election, the company’s search algorithm customized results for Obama but not for Republican Mitt Romney.

On election night in 2012, Schmidt was in Obama’s Chicago campaign headquarters “boiler room” alongside the team charged with maximizing voter turnout.

This is not us stepping back from news. This is us changing our relationship with publishers and emphasizing something that Facebook has never done before: It’s having a point of view, and it’s leaning into quality news. … We are, for the first time in the history of Facebook, taking a step to try to define what ‘quality news’ looks like and give that a boost.

The impact was startling. A recent study by the Western Journal found the following:

Liberal publishers have gained about 2 percent more web traffic from Facebook than they were getting prior to the algorithm changes implemented in early February.

On the other hand, conservative publishers have lost an average of nearly 14 percent of their traffic from Facebook.

Another study by the Outline found similar results:

Popular conservative news publishers like Fox News experienced a serious dip in total Facebook engagement following the company’s January announcement, while popular liberal ones, such as CNN, did not.

“We are…taking a step to try to define what ‘quality news’ looks like and give that a boost.”

Meanwhile, one other interesting question was raised:

@benshapiro just wondering if Facebook could be charged with making excessive campaign contributions to Obama and Dems for allowing free data mining worth millions of dollars to benefit one political party??

If the Facebook data was worth millions, why wasn’t it counted as political contributions by the Obama Campaign.

Valuable Facebook data was given to the Obama Team for free.

In contrast, the Trump Campaign was taking bids from Cambridge Analytica – along with bids from other vendors – the data had measurable value.

Congressional members – especially those on the Democrat side – have begun calling for an investigation into Facebook.

Congress should focus on Facebook – but equally on Cambridge Analytica, engaging in theft and misuse of personal data, dirty tricks, and services for Russians.

These same folks were noticeably quiet in 2012.

I’m guessing they haven’t really thought this through.

Their harvesting and misuse of data should be a concern to all. When it’s being done for political purposes the concerns mount.

There’s a final one-sided element to this whole situation. As noted by Ms. Davidsen:

Where this gets complicated is, that freaked Facebook out, right? So they shut off the feature. Well, the Republicans never built an app to do that. So the data is out there, you can’t take it back, right? So Democrats have this information.

But Republicans do not have that information and they will not be able to gain access to it.

The reality is that Republicans would never have been allowed the same access as Democrats. Ms. Davidsen stated this herself.