A few posts back I noted that Goodlatte’s House Judiciary Committee was expected to issue a subpoena to the Justice Department this week.

You can find his press release here. A pdf of his letter and subpoena here.

Four months have passed since Chairman Gowdy and I, along with Representatives Jordan, Meadows, Buck, and Ratcliffe, wrote you seeking documents related to our ongoing investigation regarding charging decisions in the investigation surrounding former Secretary Clinton’s private email server in 2016.

To date, the Department has only produced a fraction of the documents that have been requested. In addition, in early February, I wrote the Department and the Federal Bureau of Investigation seeking documents related to potential abuses of the Foreign Intelligence Surveillance Act. No documents have been provided to the Committee in response to this request.

Given the Department’s ongoing delays in producing these documents, I am left with no choice but to issue the enclosed subpoena to compel production of these documents.

Here are photo-grabs of the documents being requested: 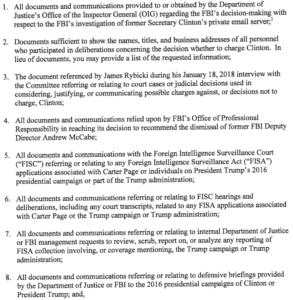 I found question 9 to be of particular interest:

I didn’t expect to see this question.

Goodlatte is not explicitly stating there is/was FISA surveillance of the Clinton Foundation – but he seems to be implying rather strongly such surveillance exists.

We will have to wait for more information.

But it’s the single footnote in his letter that proves even more interesting:

This request does not, at this time, include records of grand jury deliberations or proceedings covered by Rule 6(e) of the Federal Rules of Criminal Procedure. This exclusion, however, does not extend to documents merely presented to the grand jury, derived from documents presented to a grand jury, or any documents revealing when the court made the decision to empanel a grand jury.

The footnote is specifically connected to Question #1 of Goodlatte’s subpoena:

1. All documents and communications provided to or obtained by the Department of Justice’s Office of the Inspector General (OIG) regarding the FBI’s decision-making with respect to the FBI’s investigation of former Secretary Clinton’s private email server.

This could be read this as precautionary language. But Goodlatte appears fairly specific.

…any documents revealing when the court made the decision to empanel a grand jury.

Enticing. But there’s no definitive proof in Goodlatte’s footnote alone.

However… the DOJ had a preliminary response to Goodlatte.

Thanks to the Conservative Treehouse for finding this tweet by Chad Pergram:

DoJ on Hse Judiciary Cmte’s subpoenas: We are individually reviewing the remaining documents to ensure that they do not include grand jury information, information about ongoing law enforcement actions involving American citizens, or privileged attorney-client communications.

Between the footnote and DOJ’s response, it sounds like a Grand Jury already exists.

Add to the mix, AG Sessions recent comments regarding Outside Prosecutors. From an earlier post:

Prosecutorial power may already be in place – as recently described by AG Jeff Sessions:

I have appointed a person outside of Washington, many years in the Department of Justice, to look at all the allegations that the House Judiciary Committee members sent to us – and we’re conducting that investigation.

The Attorney General has directed senior federal prosecutors to evaluate certain issues raised in your letters.

These senior prosecutors are separate from the Inspector General and his team. More here.

The full scope of Session’s Outside Prosecutor remains to be seen but we are getting tantalizing hints. My guess is the scope is much larger than broadly anticipated.

The Inspector General has broad powers to investigate but cannot prosecute. There are some other limitations as well. From an earlier post:

Inspector Generals have no prosecutorial power. But they can refer individuals for prosecution.

The DOJ Inspector General specifically lacks authority to investigate misconduct by DOJ attorney-prosecutors, who under the current arrangement answer only to Justice’s Office of Professional Responsibility.

It makes sense that Sessions would establish a “parallel track” prosecutorial team to work in tandem with IG Horowitz.

The sheer volume of documents the Inspector General has obtained – 1.2 million and growing – is almost overwhelming.

It would take a prosecutorial team to wade through them all.

And present evidence to an already empaneled grand jury.

Meanwhile, don’t forget about the possible FISA surveillance of the Clinton Foundation.