Grassley’s letter is interesting for a variety of reasons which will be detailed below.

Among other things, Grassley is challenging redactions made to Strzok texts. The body of the letter:

On May 1, 2018, and May 18, 2018, Committee staff reviewed in camera less redacted versions of the Strzok and Page text message productions provided to the Committee. On several occasions, my staff have requested that the Department of Justice provide the Committee with a redaction key, to no avail. Thus, the Committee is still in the dark about the justification the Department is relying upon to withhold that information from Congress. As one example of redacted material, in a text message produced to the Committee, the price of Andrew McCabe’s $70,000 conference table was redacted.[1] In another, an official’s name was redacted in reference to a text about the Obama White House “running” an investigation, although it is unclear to which investigation they were referring.[2]

In order to see under the redactions, Committee staff had to travel to main Justice to review a lesser redacted version. When viewing the still redacted portions in context with the unredacted material, it appeared that the redacted portions may contain relevant information relating to the Committee’s ongoing investigation into the manner in which the Department of Justice and FBI handled the Clinton and Russia investigations.[3]

Congress, and the public, have a right to know how the Department spends taxpayer money. I am unaware of any legitimate basis on which the cost of a conference table should be redacted. Embarrassment is not a good enough reason. The manner in which some redactions have been used casts doubt on whether the remaining redactions are necessary and defensible.

$70,000 tax-payer funded coffee tables for Andrew McCabe aside, there’s a fair bit of information contained within this short letter.

In essence, Gassley’s letter is almost a taunt. He knows everything. And he’s telling the DOJ exactly that.

Since 1993, FRCP 26(b)(5) has included the following language: “When a party withholds information otherwise discoverable by claiming that the information is privileged or subject to protection as trial preparation material, the party must:

i. Expressly make the claim; and

ii. Describe the nature of the documents, communications, or tangible things not produced or disclosed – and do so in a manner that, without revealing information itself privileged or protected, will enable other parties to assess the claim.

There are some practicability carveouts:

Most logs should be document-by-document, but this approach is not mandatory.

1993 Committee Note: 26(b)(5) “does not attempt to define for each case what information must be provided when a party asserts a claim of privilege or work product protection. Details concerning time, persons, general subject matter, etc., may be appropriate if only a few items are withheld, but may be unduly burdensome when voluminous documents are claimed to be privileged or protected, particularly if the items can be described by categories.

But it does not appear they apply here:

“[I]n appropriate circumstances, the court may permit the holder of withheld documents to provide summaries of the documents by category or otherwise limit the extent of his disclosure. This would certainly be the case if (a) a document-by-document listing would be unduly burdensome and (b) the additional log would be of no material benefit to the discovering party in assessing whether the privilege claim is well-grounded.”

The privilege log clearly is of material benefit to the discovering party – as Grassley notes in his letter. It’s why he wrote his letter.

In many cases the entire meaning of whole text chains can’t be understood without removal of specific redactions.

Grassley’s letter seems to further indicate he sees no legal reason why a blanket response is valid. Additionally, Grassley likely has some legal merit as he’s already noted the use of unnecessary levels of redactions by DOJ.

Here are the footnotes I referenced earlier:

[1] Page: No way to change the room.  The table alone was [70k]. (You can’t repeat that!) No, instead it just means we now have to get a small conference table for his actual office, so that he can actually have a meeting that is intimate.  DOJ-PROD-0000118.  On April 3, 2015, as a result of my inquiring into the spending practices of the United States Marshals Service, the agency responded in an unredacted letter that a conference table cost $22,000.  Thus, there is no reasonable justification for redacting the cost of a conference table.  Letter from William Delaney, Chief of Congressional and Public Affairs, USMS, to Senator Charles Grassley, Chairman.  Sen. Comm. on the Judiciary (April 3, 2015).

Footnotes 1 and 2 are interesting precisely because Grassley apparently unredacts them himself – and reveals a name in the process.

Footnote 2: Went well, best we could have expected.  Other than [Liz’s] quote, “the White House is running this.”

Andrew McCarthy provides a good breakdown of the larger conversation surrounding “the White House is running this.”

On the afternoon of August 5, Strzok and Page engaged in a tense conversation which involved an imminent meeting with “agency people” — an apparent reference to the CIA. Strzok suggested that, for the new case, they should conduct Monday, Wednesday, and Friday morning meetings “with [REDACTED]” just “like we did with mye” — Mid Year Exam, the Clinton probe.

Finally, after some back-and-forth over who should be invited to a major meeting about the new case, a meeting was held. In the aftermath, at about 4:30 p.m., Strzok and Page had the following exchange:

Strzok: And hi. Went well, best we could have expected. Other than [REDACTED] quote: “the White House is running this.” My answer, “well, maybe for you they are.” And of course, I was planning on telling this guy, thanks for coming, we’ve got an hour, but with Bill [Priestap] there, I’ve got no control….

Page: Yeah, whatever (re the WH comment). We’ve got the emails that say otherwise.

McCarthy didn’t have the benefit of Grassley’s letter at the time of writing. [REDACTED] is now [Liz’s].

“Liz” may be Elizabeth Aloi. She is the Chief of DOJ’s Special Financial Investigations Unit. I will try to verify if this is correct. If so, I will try to find out more about Ms. Aloi later. 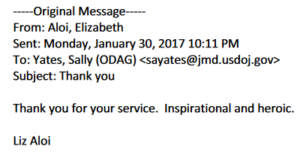 Yates, of course was fired. Yates will likely find herself featured in one or more of the forthcoming Inspector General’s Reports.

Grassley – as far as I can tell – decided to reveal what was seen in the “less-redacted” setting provided for Committee staff. The first example of the $70K coffee table is so indefensible he appears to be challenging DOJ to do anything about the second redaction.

Footnote 3 references other specific documents that have piqued Grassley’s interest. They can be found in the documents produced by Senator Ron Johnson which I’ve highlighted before. Here’s the pdf:

As you can see, it’s quite long. But Grassley’s footnotes provide a roadmap. Using the reference numbers begin on page 227 of the pdf.

Grassley’s highlighted texts include most of the famous sequences – along with a few lesser examined conversations.

I’m not going to try and reinvent the wheel. There’s plenty of folks who’ve already spent significant amounts of time analyzing these.

I have posted the relevant portions as noted by Grassley.

Consider these both a roadmap and concurrent area of Grassley’s focus. 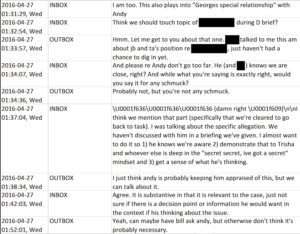 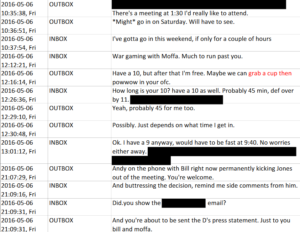 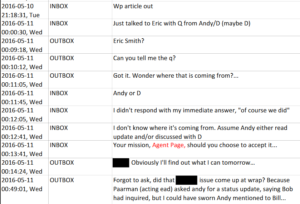 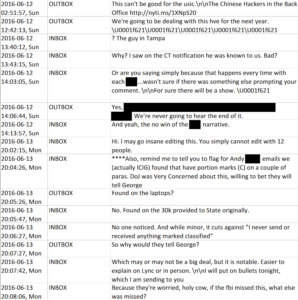 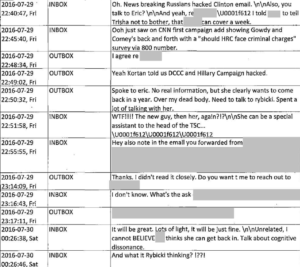 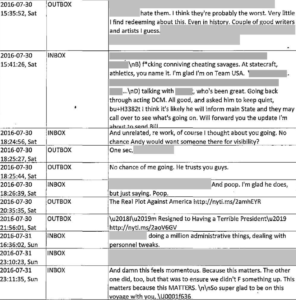 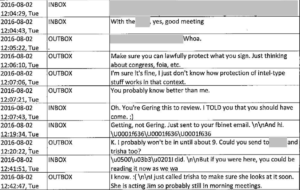 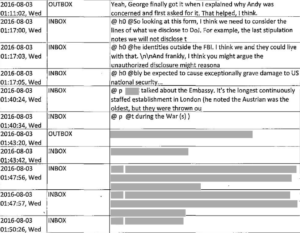 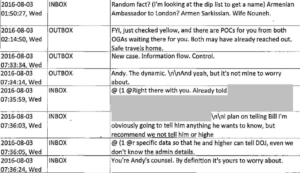 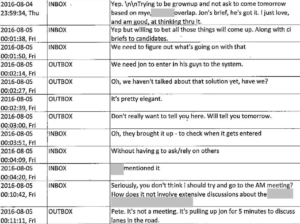 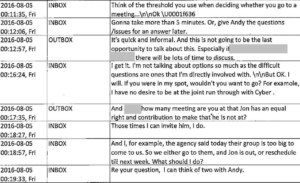 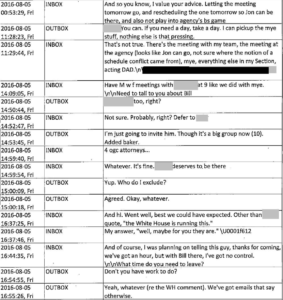 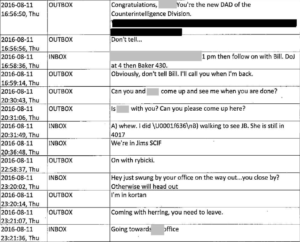 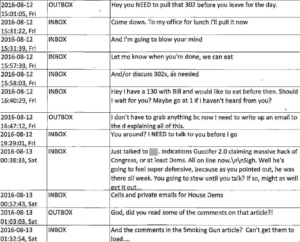 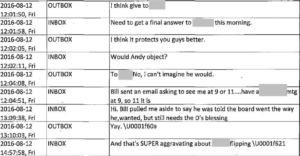 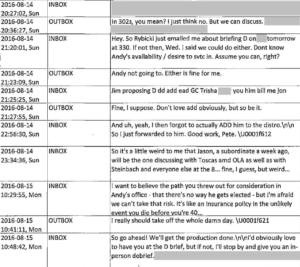 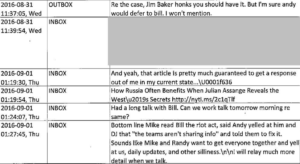 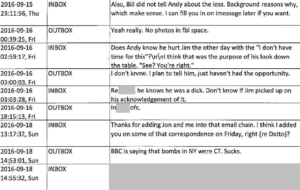 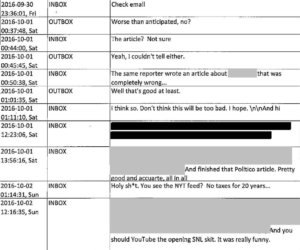 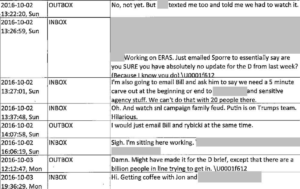 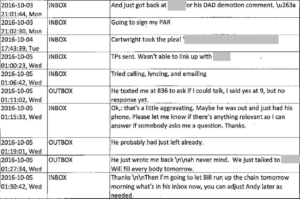 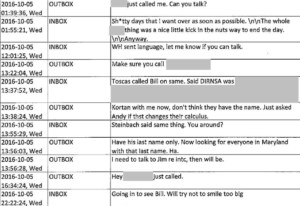 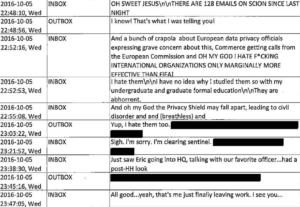 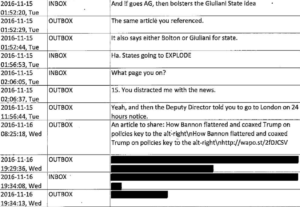 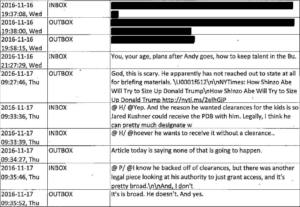 There was a lot more in Grassley’s letter than initially meets the eye.

Happy hunting to the internet sleuths.