There are two ways to do something…the right way, and again – Navy SEAL saying

Note: This is the first time Inspector General Horowitz has provided a hard date for release of his Report. Previously, everyone has been forced to infer release dates based on testimony scheduling.

There’s something particularly auspicious about the chosen release date:

President Trump has chosen what his birthday present is this year.

June 14th is indeed President Trump’s birthday. He will be 72 years old.

There will probably be much wailing and gnashing of teeth from the talking heads.

This is misguided. And should be ignored.

There’s an intense amount going on behind the scenes – as evidence by all the activity from Grassley. The release needs to be done correctly and results are more important than timing.

This date, while not set in stone, is the firmest date we’ve received.

The Inspector General’s letter can be found here. Photo-grabs below: 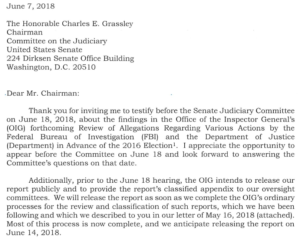 We’ve already witnessed the start of the media spin. The intent appears clear. Stop the political damage at Comey – who stands between the DOJ and more importantly, the Obama Administration.

Sundance at the Conservative Treehouse discusses the strategy here.

Expect leaks and narrative framing to continue in front of the IG Report’s release. Expect the media spin to accelerate following the release. Attacks on the Inspector General’s credibility are to be anticipated.

Recall what will be covered in the pending Inspector General Report – events undertaken in the Clinton Email Investigation – along with actions by the DOJ & FBI in advance of the 2016 Election.

From the Inspector General’s January 12, 2017 Initiation of Review:

How I loosely view the Inspector General’s series of Investigations:

Segments and findings will bleed from one phase to other but this provides a simple framework of the Inspector General’s approach.

Expect the IG Report to be dry and factual – replete with findings, recommendations and referrals. Given the anticipated length, details will continue to be uncovered post-release.

The Inspector General’s Report should be available and issued from these sources of information:

Have patience. To do things right is more important than to do them quickly.