On March 23, 2018 I wrote about a letter – and a subpoena – sent by Bob Goodlatte to Deputy AG Rod Rosenstein.

You can find his press release here. A pdf of his letter and subpoena here.

Four months have passed since Chairman Gowdy and I, along with Representatives Jordan, Meadows, Buck, and Ratcliffe, wrote you seeking documents related to our ongoing investigation regarding charging decisions in the investigation surrounding former Secretary Clinton’s private email server in 2016.

In addition, in early February, I wrote the Department and the Federal Bureau of Investigation seeking documents related to potential abuses of the Foreign Intelligence Surveillance Act.

As the Presiding Judge of the FISC, you must be similarly concerned that the Executive Branch allegedly used an unverified dossier as evidence showing probable cause that someone connected with the Trump campaign, Carter Page, was an agent of a foreign power.

Rosemary M. Collyer is the judge who wrote the 99 page April 26, 2017 Memorandum Opinion and Order regarding the findings by NSA Mike Rogers.

Goodlatte’s March 22, 2018 Subpoena expanded on his February 1st letter. Instead of five requests, nine were made. Requests 5-9 were particularly noteworthy: 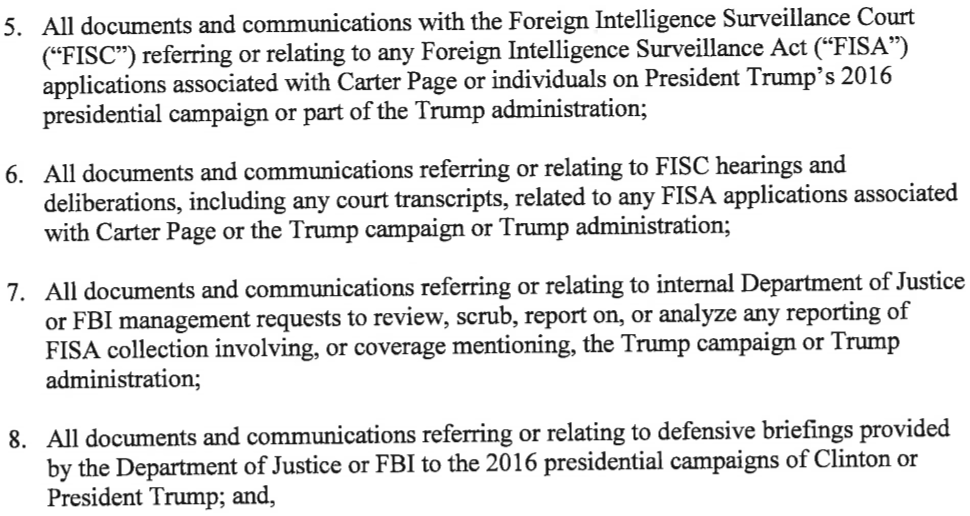 Tyson’s letter noted that requests 2-6 had been complied with. Requests 1 & 8 were in the process of being filled and were entwined with the Inspector General’s recent Report.

Goodlatte may have an entirely differing perspective regarding the FBI’s completion of responses to Requests 1-6 & 8 but we will await his response on those matters.

Responses to Questions 7 & 9 were more interesting.

The FBI is responding [to Request No. 9] by separate, classified letter.

Request No. 9 is proving difficult to address and the FBI is seeking to further engage with the Committee to better understand the information sought. Because Committee Staff have indicated that Request Nos. 8 and 9 may be related, the FBI believes that some of the defensive briefing materials…might relate to Request No. 9.

Although the FBI claims it lacks clarity, the initial response to Request No. 9 requires a separate, classified letter.

I have several questions:

In January 2018, it was reported an investigation into the Clinton Foundation was re-opened.

Could this be it? DOJ investigation opened Jan about CF pay-to-play activities while HRC was Sect of State. A FISA request of a foreign actor could have captured CF emails using the home server…

Note: Questions 5, 6 & 7 also dealt with FISA issues. Per the FBI, with the exception of Request No, 7, these questions have all been answered:

The issue with Request No. 7 is stated to be related to sheer volume of emails.

Although one might readily ask oneself how there comes to be between 50,000 and 65,000 Top Secret emails relating to FISA collection/coverage of the Trump Campaign…

My guess: the FBI is still stonewalling in regards to Request No. 7 given its nature…

Nevertheless, why does Request No. 9 require such special handling and deferment relative to Requests 5, 6 & 7.

Reminder: The FBI assigned a forensic accountant (FoA) to Hillary’s wedding and yoga email investigation and we never heard why.

.@KeithRothfus to IG Horowitz: Did those conducting the Midyear Exam search for emails with the https://t.co/ymtrRarR1w root on databases that held data pursuant to FISA? pic.twitter.com/suNAkLhMGp

I really wish I’d thought to ask it:

The FBI has multiple points of access to NSA Database.
The DOJ Inspector General – w/FBI Oversight – would be allowed access as well.

Is it possible the reason for special treatment of Request No.9 relates to scope of the Inspector General’s Investigations.

Horowitz is already investigating FISA Abuse during the election. Requests 5, 6 & 7 are certain to be covered under his ongoing FISA Investigation – which is likely approaching completion.

Request No. 9 may fall outside the IG’s purview – or focus. Which may explain the differing treatment by the FBI.

The information certainly appears to be highly sensitive:

Whatever is in the documents related to FISA surveillance & warrant(s) aimed at Clinton foundation is so classified FBI has to issue a National Security Letter. This is exceedingly rare.

Goodlatte had an initial response to the FBI’s document production:

Goodlatte on Fox: We now have an office at the DoJ..a reading room were a million documents reside. We can examine all of those documents unredacted, identify the ones we want produced and they are producing them.

One last item for those who missed it in my earlier post.

This request does not, at this time, include records of grand jury deliberations or proceedings covered by Rule 6(e) of the Federal Rules of Criminal Procedure. This exclusion, however, does not extend to documents merely presented to the grand jury, derived from documents presented to a grand jury, or any documents revealing when the court made the decision to empanel a grand jury.

This could be read this as precautionary language. But Goodlatte appears fairly specific.

…any documents revealing when the court made the decision to empanel a grand jury.

Enticing. But there’s no definitive proof in Goodlatte’s footnote alone.

However… the DOJ had a preliminary response to Goodlatte back in March 2018:

DoJ on Hse Judiciary Cmte’s subpoenas: We are individually reviewing the remaining documents to ensure that they do not include grand jury information, information about ongoing law enforcement actions involving American citizens, or privileged attorney-client communications.

Between the footnote and DOJ’s response…