Right out of the gates:

PRESIDENT TRUMP: Well, I have to say, I think it’s very sad when Germany makes a massive oil and gas deal with Russia, where you’re supposed to be guarding against Russia, and Germany goes out and pays billions and billions of dollars a year to Russia.

So we’re supposed to protect you against Russia, but they’re paying billions of dollars to Russia, and I think that’s very inappropriate.

And the former Chancellor of Germany is the head of the pipeline company that’s supplying the gas.

On top of that, Germany is just paying a little bit over 1 percent [into NATO], whereas the United States, in actual numbers, is paying 4.2 percent of a much larger GDP. So I think that’s inappropriate also. You know, we’re protecting Germany, we’re protecting France.

We’re protecting everybody. And yet we’re paying a lot of money to protect.

…Why are countries in NATO, namely Germany, having a large percentage of their energy needs paid to Russia and taken care of by Russia?

The next exchange highlighted the less than subtle differences between a diplomat/politician and a businessman:

STOLTENBERG: You know, NATO is an alliance of 29 nations, and there are sometimes differences and different views, and also some disagreements. And the gas pipeline from Russia to Germany is one issue where allies disagree.

But the strength of NATO is that despite these differences, we have always been able to unite around our core task, to protect and defend each other, because we understand that we are stronger together than apart.

I think that two World Wars and the Cold War taught us that we are stronger together than apart.

STOLTENBERG: Because we understand that when we stand together, also in dealing with Russia, we are stronger. I think what we have seen is that —

By the way, the meeting started off with these comments:

PRESIDENT TRUMP: Many countries are not paying what they should. And, frankly, many countries owe us a tremendous amount of money for many years back, where they’re delinquent, as far as I’m concerned, because the United States has had to pay for them.

So if you go back 10 or 20 years, you’ll just add it all up. It’s massive amounts of money is owed. The United States has paid and stepped up like nobody. This has gone on for decades, by the way.

You can find the entire transcript here.

As this exchange was taking place I kept seeing tweets referring to President Trump as Putin’s Puppet: 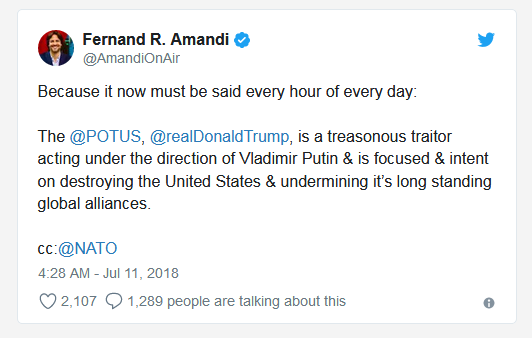 I had to screenshot this tweet because, in a rare instance, I found myself blocked. In fairness, the reason for the block was this tweet:

An impromptu thread resulted. The Thread Reader version can be found here.

President Trump campaigned on energy independence for the United States.

He immediately followed through on those promises by signing the Energy Independence Policy Executive Order, which unleashed a wave of U.S. energy production. https://t.co/qBH8i6iIV7

Forecasts are now calling for the U.S. to be a net exporter of energy as soon as 2020 – a position that was previously almost unthinkable.

The European Union is the world’s largest importer of energy.

The EU imports 53% of all the energy it consumes, at a cost of more than €1 billion per day. Energy also makes up more than 20% of total EU imports.

“The U.S. will overtake Russia to become the world’s largest oil producer by 2023, accounting for most of the global growth in petroleum supplies.”

These tweets originated from a previous post, Globally Leveraging Our Energy Production.

The upshot is this:

The EU has the best of all worlds. Cheap energy from Russia. Cheap protection from the United States.

Of course they want to maintain the status quo. But it might not be so easy.

A picture’s worth a thousand words: