On June 7, 2018, James Wolfe was arrested and charged with one count of lying to the FBI. The Wolfe Indictment was released on the same day.

The Carter Page FISA Applications were released on July 21, 2018. They can be found here, here and here.

Unexpectedly, the FISA Applications appear to be direct copies of the FISA Court’s documents – not DOJ versions.

They contain the FBI’s Application along with accompanying signature sections – including those of the signing FISA Judge. There are also Court Clerk certification stamps from March 17, 2017.

FISA Court documents are generally not subject to FOIA Requests (see also, Exemption 1 of the FOIA).

I don’t know who authorized the FISA release. I suspect it was DNI Dan Coates. And I don’t think it had anything to do with a FOIA Request – although that may have provided convenient cover for doing so.

SSCI members weren’t the only Senators to see the Page FISA Application:

On March 15, 2017 Comey briefed Grassley & Feinstein of the Senate Judiciary Committee. From the Grassley Memo:

In response to the Committee’s inquiries, the Chairman [Grassley] and Ranking Member [Feinstein] received a briefing on March 15, 2017, from then-Director James B. Comey, Jr. That briefing addressed the Russia investigation, the FBI’s relationship with Mr. Steele, and the FBI’s reliance on Mr. Steele’s dossier in two applications it filed for surveillance under the Foreign Intelligence Surveillance Act (FISA).

On March 17, 2017 – The Carter Page FISA documents were provided to Senate Judiciary Chairman Grassley and Ranking Member Feinstein. From the Grassley Memo:

On March 17, 2017, the Chairman and Ranking Member were provided copies of the two relevant FISA applications, which requested authority to conduct surveillance of Carter Page. Both relied heavily on Mr. Steele’s dossier claims, and both applications were granted by the Foreign Intelligence Surveillance Court (FISC).

According to the Wolfe Indictment, on March 17 2017 Wolfe exchanged 82 text messages with reporter Ali Watkins, and that evening engaged in a 28-minute phone call with her.

It seems more than plausible that Wolfe took pictures of the Original FISA Application and sent them by text to Watkins.

What Wolfe sent was almost certainly an unredacted version.

In the public version of the Original Page FISA Application there are 37 fully redacted pages (out of 83 total). Several other pages have redactions for all but the header. There are only two pages in the entire document that contain no redactions.

Why would Wolfe bother to send 37 pages of complete redactions.

There are also strong indications that Grassley, and by extension the SSCI, saw unredacted versions of the Page FISA Applications.

The Grassley Memo discusses the Page FISA Applications at length and nowhere does Grassley mention any redactions.

In Footnote 7, Grassley does note what he has been unable to view:

The FBI has failed to provide the Committee the 1023s documenting all of Mr. Steele’s statements to the FBI, so the Committee is relying on the accuracy of the FBI’s representations to the FISC regarding those statements.

If Grassley saw an unredacted version of the Page FISA Application, so did the SSCI. As did James Wolfe who was responsible for taking delivery of the documents on behalf of the SSCI.

On April 3, 2017, Watkins published an article in Buzzfeed, A Former Trump Advisor Met with a Russian Spy. In the article Watkins discloses that Carter Page is “Male-1” in a related Court Filing.

The Court Filing, which is 26 pages in length, is included in the Buzzfeed article. Nowhere in the Court Filing is Carter Page named.

But Page is named, referenced and linked to the Court Filing in the FISA Application delivered to the SSCI.

It seems clear where she got her information.

Of some import is this. The Original FISA Application does not delineate itself as the originating document.

If one was to read only the Original FISA Application (without specific IC knowledge) there would be no way of determining this was a first-time application unless you were told this was the case.

The original FISA Application is 83 pages including a final signatory page. 82 texts…

The FBI obtained a secret court order in October 2016 to monitor the communications of a former adviser to presidential candidate Donald Trump, part of an investigation into possible links between Russia and the campaign, law enforcement and other U.S. officials said.

The FBI and the Justice Department obtained the warrant targeting Carter Page’s communications after convincing a Foreign Intelligence Surveillance Court judge that there was probable cause to believe Page was acting as an agent of a foreign power, in this case Russia, according to the officials.

In this article, firm existence of the Page October 2016 FISA warrant was first established.

At the time of reporting, the article stated the FISA Warrant was obtained in the summer of 2016 – when Page was still part of the Trump Campaign. The article would later be updated as noted below:

Correction: This story has been updated to note that government investigators obtained a FISA warrant on Carter Page in October 2016, not the summer of 2016 as originally reported, and that in October 2016 Page was no longer an adviser to the Trump campaign.

The Washington Post, along with others, had been reporting of a FISA Warrant in June/July 2016. There were reportedly two FISA attempts made in June/July. They were denied.

My guess is Barrett and the other reporters assumed FISA Surveillance began on Page in the summer of ’16 and initially failed to appreciate they were holding the Original FISA.

It wasn’t just Barrett’s article that got it wrong. Later reporting cited October 19th – not October 21st – as the date of the Original FISA Warrant.

From the Conservative Treehouse:

The use of October 19th is interesting. Where did that date originate from.

Full dates are not provided in the original FISA Application or subsequent renewals. The only complete date we have is the Court Clerk’s March 17, 2017 handwritten initials certifying a “true and correct copy of the original”.

We know what the actual dates should be from a February 28, 2018 Grassley letter to Inspector General Horowitz:

Who leaked classified information about the Page FISA warrant to the Washington Post while the warrant was active? Why?

So where did the Washington Post get October 19th.

An unredacted version of the Original FISA may prove to be interesting. What date lurks behind the redaction in the October FISA Application. Was a trap set in advance of the March 17, 2017 viewing.

There may have been more than one trap. We’ll touch on that in a bit.

If Wolfe, Watkins, Barrett and the two other reporters Wolfe leaked to (probably Sotomayor & Ross) had the Original FISA documents in their possession since March 17, 2017 – who else have they shown them to…

Has the entire media set had unredacted copies of the first two FISA Applications in their possession – selectively mining them for stories and leaks.

Nunes has been asking President Trump to declassify the FISA Documents. As he noted on Tucker Carlson:

There is a National Security reason to make sure the American public sees this in its entirety because this is a phony FISA.

The DOJ and FBI put something together that is completely fraudulent in order to spy on an American citizen.

If Nunes is convinced complete redaction will make the fraud obvious to all, consider what the media may have been doing this entire time.

Publishing damaging details from the FISA while having full access to the truth.

Two other notes of interest. Feinstein saw the FISA documents along with Grassley on March 17, 2017.

Feinstein’s former staffer happens to be this guy (from A Listing of Paticipants):

Jones spoke with the FBI on March 28, 2017. He reportedly told the FBI the Penn Quarter Group had retained the services of Christopher Steele and Fusion GPS.

Why would Jones be speaking to the FBI at exactly this critical juncture. Did Steele and Fusion see the FISA Application as well. The timing appears a tad…suspicious.

Wolfe currently appears to be fighting the charges of lying to the FBI. Which is strange because the DOJ appears to have him dead to rights.

On July 27 2018, the WSJ reported that attorneys for Wolfe sent letters to all 15 senators on the Senate Select Committee on Intelligence, notifying them that their testimony may be sought as part of Wolfe’s defense:

Members of the Senate Intelligence Committee have been notified they may be asked for testimony as part of the criminal trial of a veteran Senate staffer accused of lying to the FBI while working for the panel.

If senators declined to appear voluntarily for either a deposition or at trial, they could be subpoenaed. That action that could spark a legal battle over a constitutional provision that gives lawmakers certain immunity and privilege for actions undertaken as part of their official duties, as well as over how much national security information can be disclosed in open court.

Three possible reasons for this lawsuit:

As to why the DOJ has only charged Wolfe with one count of lying to the FBI, I offer three scenarios:

One last issue – just because it’s bothering me. 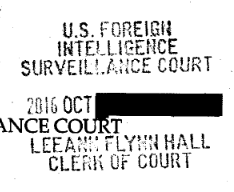 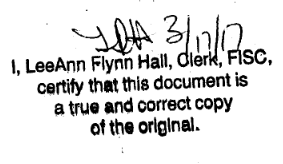 All five of the Court Clerk’s certification stamps are unredacted in the Original (October 2016) FISA Application.

In the first (January 2017) FISA Renewal, the Court Clerk’s certification can be found on pages 150, 159, 161, 162 and 181. The certification stamps are unredacted and essentially identical to those found in the Original FISA Application.

With the notable exception of page 181.

This is the final page – signed by FISA Judge Michael Mosman: 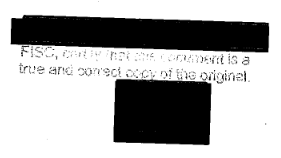 The stamp is entirely different from the ones preceding it and has the name, date and initials fully redacted. This new version is also found in the second and third FISA Renewals.

Note: The second and third FISA Renewals occurred after the March 17, 2017 viewing by Wolfe and the Senate Select Committee on Intelligence. These documents did not exist on March 17, 2017.

In the second (April 2017) FISA Renewal, the Court Clerk’s certification can be found only on the final page (page 291). This is the page signed by FISA Judge Anne Conway. 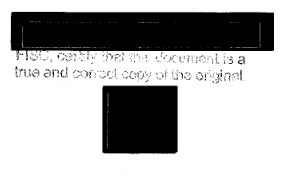 In the third (June 2017) FISA Renewal, the Court Clerk’s certification can be found only on the final page (page 412). It is slightly different but redacted in similar fashion. This is the page signed by FISA Judge Raymond Dearie. 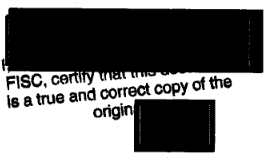 Why are certification stamps by LeeAnn Flynn Hall only on the Original FISA Application and – with the exception on page 181 – the first FISA Renewal. Why are dates associated with her stamp unredacted.

I hesitate to make too much of this but the differing certification stamps and redaction treatment feel like some sort of marker.

Some basic details from the FISA Documents:

The Original FISA Application is 83 pages long. 37 pages are fully redacted. Several other pages have redactions for all but the header.