There’s been a lot of speculation about the role of George Papadopoulos. Especially in light of new information covered yesterday.

Initially, I was convinced that Papadopoulos was a nothing more than a pawn in a much larger game. But as new information and a continuation of ever-increasing coincidences came forth, I began to reassess that position.

I want to be clear. I don’t have enough information to be certain of anything. But I’m far from convinced that Papadopoulos was simply an innocent victim of events.

Let’s look at what we actually know.

We know that Papadopoulos met multiple times with Mifsud in the first half of 2016:

Note: Papadopoulos and Mifsud reportedly both worked at the London Centre of International Law Practice.

Some reports indicate Papadopoulos joined in November 2015 – the same time as Mifsud (h/t ChainsawSue). They reportedly never crossed paths or met until March 14, 2016.

Somewhere between April 14-May 10 2016 Papadopoulos leaves his position at LCILP. Timing is unclear.

It appears that Papadopoulos’ position was primarily in name only and details on LCILP are suspiciously vague (more here).

We know that Papadopoulos lied about the timing and nature of those meetings. From the July 28, 2017 Affidavit:

We know his lies were material. A description of actual contacts taken from the Affidavit tells a different story than Papadopoulos’ portrayal. On March 24 2016:

There are more example like this contained in the Affidavit. Papadopoulos’ contacts with Mifsud were more serious than he let on in his initial FBI Interview.

We know that Papadopoulos continuously pushed for meetings between Trump Campaign officials and Russian contacts:

The persistence of Papadopoulos has always bothered me. At some point your efforts become counterproductive. How many times do you have to be told “no”.

The ongoing attempts by Papadopoulos feel eerily similar to those made by Mifsud and Halper. Use intentionally manufactured meetings and contacts to create perceived associations with Russia.

Papadopoulos was unsuccessful in establishing any meetings throughout his employ.

We know that Papadopoulos suddenly got rid of his cell phone:

On or about February 23, 20 17, defendant Papadopoulos ceased using his cell phone number and began using a new number.

We know that Papadopoulos began cooperating with the FBI no later than the day following his July 27, 2017 arrest. From the July 28, 2017 Motion to Seal: 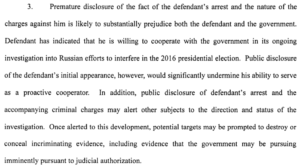 The October 5, 2017 transcript reiterated Papadopoulos’ cooperation with the Special Counsel:

And later, in a very interesting discussion regarding Papadopoulos’ ability to gain information in the future through FOIA:

The other important factor in this case is that in the process of his ongoing efforts to cooperate, the Government has shared substantial information with the Defendant that has provided a road map of sorts, if you will, to information that might then be sought on FOIA.

And it will chill the Government’s ability to continue to have the Defendant cooperate if the information that’s being provided by the Defendant and the continued efforts to jog his memory are then used to create a road map to the ongoing investigation and the FOIA requests that would ensue from that.

A quick clarification as to what information was being shared:

So we know without doubt, Papadopoulos was cooperating with Mueller from at least July 28, 2017.

We know that Papadopoulos’ agreement of government cooperation was reached swiftly – and with no attorney present:

Papadopoulos was arrested on July 27, 2017 at Dulles airport at 7pm in the evening. He flew in from Munich, Germany.

The same day, on July 28 2017, Papadopoulos appears in court. He does not have an attorney and his case is sealed. Papadopoulos agrees to cooperate with Mueller.

For a good walk-through of the court documents see this overview from Tracybeanz:

THIS is one of the most important videos I have done in a long time. It is 10 minutes long. PLEASE watch and share this one. https://t.co/F14kfMCa32

Horowitz’s discoveries led him to initiate a new angle to his investigation. It also led him to notify Mueller of his findings on July 27, 2017:

On July 27, 2017, upon our identification of many of the political text messages, the Inspector General met with the Deputy Attorney General and the Special Counsel to inform them of the texts that we had discovered.

George Papadopoulos was arrested by the FBI later on the same day Horowitz informed Mueller of the Strzok texts. Papadopoulos flew in from Germany for the event.

That memo is heavily redacted. I would dearly love to know what lies behind those redactions.

We know the House Memo noted the use of Papadopoulos to open the FBI’s July 31, 2016 Counterintelligence Investigation:

The Papadopoulos information triggered the opening of an FBI counterintelligence investigation in late July 2016 by FBI agent Peter Strzok.

This point is important in relation to Papadopoulos’ arrest – one full year later. The FBI already knew everything in July 2016. As ImperatorRex noted: It’s not like the FBI first learned of Papadopoulos’ connection to Mifsud when interviewing him in January 2017.

Quick take: I think the FBI may have tried to use Papadopoulos in those two June 2016 FISA attempts – and failed.  For my thoughts on that see here.

We also know that no official intelligence was used in opening the FBI’s Investigation:

We are investigating the State Department. We think there are some major irregularities at the State Department and we’re trying to figure out how it is that this information – about Mr. Papadopoulos of all people – who was supposedly meeting with some folks in London, how that made it into the FBI’s hands.

The FBI’s inability to obtain a FISA Warrant in June and July 2016 would explain why the FBI opened its July 2016 Counterintelligence Investigation with no official evidence.

We know that Mifsud was interviewed by the FBI and never charged:

As I’ve said before, I don’t have enough information to make a determination on Mifsud at this point, but I strongly suspect ties with British Intelligence will prove accurate.

Julian Assange put out a Twitter Thread noting the connection between Mifsud and UK Intelligence.

But who’s the guy on the right? pic.twitter.com/VzIc8vVeTz

Disobedient Media has done a series of articles on Mifsud’s strange background – or lack thereof (here, here, and here).

I believe ties to British and/or Western Intelligence will ultimately come forth.

We know we don’t know much about Papadopoulos’ now-wife, Simona Mangiante.

The triangle between Mangiante, Papadopoulos and Mifsud is, at best, strange. From a January 18, 2018 Guardian article:

Long before Mifsud and Papadopoulos ever met, it was Mangiante who was introduced to the mystery professor while she was working in Brussels, in the European parliament, as an attorney specialising in child abduction cases.

She was introduced to Mifsud in about 2012 by Gianni Pittella, a well-known Italian MEP who in 2014 became president of the Socialists and Progressive Democrats group.

Pittella suggested she go to work for Mifsud in London, a city she loved. The professor offered her a job in 2016 at the important-sounding London Centre of International Law Practice. She was recruited, she now thinks, because of her extensive Brussels “contacts book”.

At around the same time that she started the job, in September 2016, Mangiante received a message on the LinkedIn social network from Papadopoulos. Papadopoulos had worked at the law centre briefly before joining Trump’s campaign.

Read the article. The full sequence of coincidental events is…unusual.

In an article from last night, Sundance referred to Simona Mangiante as the “wife-not-wife/spy-not-spy of Papadopoulos”. I laughed.

Mangiante was on Tucker Carlson last night. Towards the end she asked publicly for a Presidential Pardon. She also mentioned her employment by Mifsud in passing. Watch Tucker’s reaction at the 1:47 mark. Unfortunately he fails to pursue that particular avenue:

ImperatorRex did a short thread on Mangiante. You can find it here:

4. And I can’t help but wonder at the coincidence of Mangiate’s sudden appearance, on the SAME DAY that we learn of Strzok bragging about having OCUNUS LURES approved, back in Dec 2015:https://t.co/ix8gb6JHw5

For a deeper dive into the strange alignment of Mifsud, Papadopoulos & Mangiante see this thread by Rising serpent:

1. Fiction is truly anemic compared to the rich tapestry of the bizarre that we are privy to in daily life: consider this:
Simona Mangiante first connected with Papadopoulos on LinkedIn after Papadopoulos noticed they shared a mutual connection.

Everything about this smells.

The thing is, I can still make a case either way on Papadopoulos. The disinformation campaign has been effective.

I’ve got my leanings and suspicions but I’m still not sure. Therefore, I’ll close this post as I did yesterday:

There are any number of conclusions that can be drawn. But, for me, it’s too early to do so. At this juncture I’m choosing to let the strangeness of facts stand on display.